Shadow of the Run Chapter 1: WanderLust 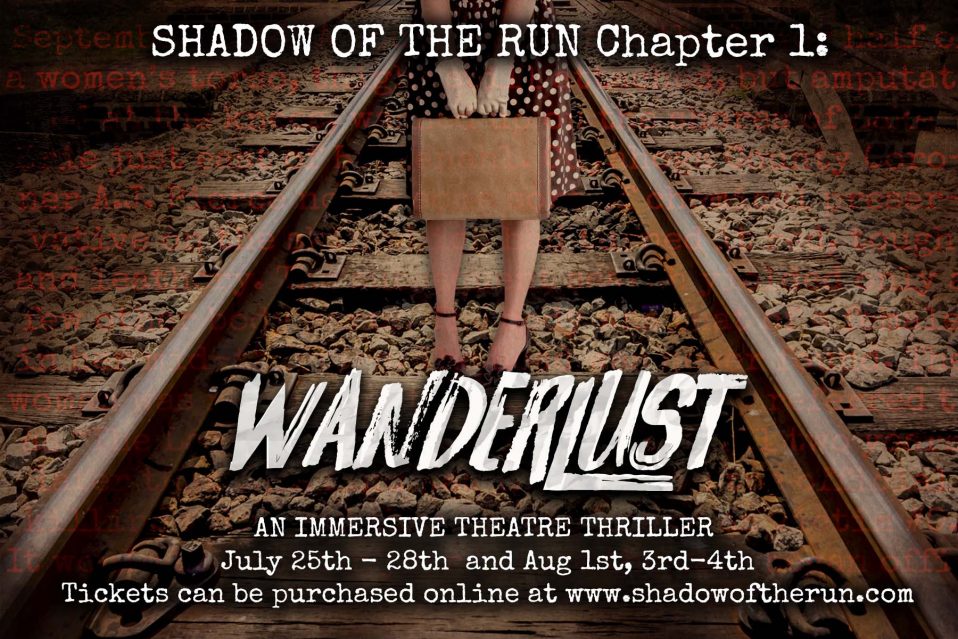 Immersive Theatre project SHADOW OF THE RUN Chapter 1: WanderLust will premiere in a limited engagement in July and August of 2019 in the City of Bedford.

WanderLust brings immersive theatre to Northeast Ohio. Immersive theatre puts audiences in the middle of the action, a “Choose Your Own Adventure” scenario, where their experience is determined by the choices they make,” said Kern. “While this production will give a small taste to Cleveland audiences, future productions will offer potentially long-term employment opportunities for many of the artists and technicians of the city and will draw in audiences from around the country thanks to a Cleveland-specific story with a universal appeal.”

“We are very excited to be investors in Cleveland’s first immersive theatrical production, SHADOW OF THE RUN: Chapter 1 – WanderLust, and proud to be a part of the production team. Bedford, with its beautiful and historic buildings, will lend authenticity to the story and enhance the experience for the theatergoer.” – Carol Dolan and Gregg Hill

Prosperity. Joy. Ambition. Regret. In a time where family was one’s true north, with the Great Depression looming, a wave of discontent rushed over the city. Ambition can lead to desperation; regret can lead to death. A young girl is ready to leave home for the big city, despite strangling words of caution from a family that can’t, or won’t understand her.
With a chance to find a brighter path…she finds him instead – the origin of a heartbreaking legacy that will stain the city of Cleveland for years to come.

Audiences today are choosing personal experiences over the purchase of physical objects. Immersive theatre dives into this mindset – a guest can attend multiple performances and have a completely different experience based on the choices they make throughout the evening. Combining elements from theatre, night clubs, and personal exploration into one evening of fully engaging entertainment, audiences will want to gather afterwards to share their experience and make plans for their next trip.

Shadow of the Run was conceived in December 2015 by Beth McGee and Adam Kern. In January 2016 the project was awarded a $1,000 grant as an audience favorite from Notre Dame College’s SEAChange Program, prior to appearing in the Cleveland Leadership Center’s Accelerate Competition in February of the same year. With initial support from Joe and Anthony Russo, the team continued development to find the right opportunity to bring Immersive to the city of Cleveland. As implied in the title Chapter 1: WanderLust is the first part of a larger production, aimed for a 2020 opening. Investors and sponsors can reach Adam Kern at shadowoftherun@gmail.com. There will also be a Kickstarter campaign leading up to the 2019 performance.

Shadow of the Run LLC will present ongoing original immersive works, like New York’s Sleep No More which has been running continuously since 2009 in Hell’s Kitchen. After WanderLust and the rest of the Shadow series, the company has three other projects they plan on premiering in Cleveland, in hopes of making the city the Immersive capital of the Midwest.

Register for Event: Shadow of the Run Chapter 1: WanderLust

Your ticket for the: Shadow of the Run Chapter 1: WanderLust

Shadow of the Run Chapter 1: WanderLust