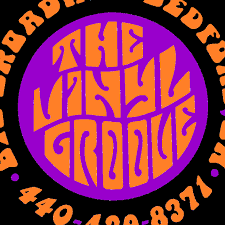 It’s Saturday in 1977.  Your mom is dropping you off at Coconuts at Southgate with your week’s worth of babysitting or lawn-mowing money.  You spend hours there, head bent, sifting through albums looking for your favorite band while hoping to spot that cute girl or boy from your class across the store.  You agonize over buying the comforting and always pleasing Doobie Brothers or the Hotel California album because the cover (yes, the artwork on the cover used to matter) looks so awesome and buying it makes you look intense. Not to mention it will piss off your mom when she hears you playing that “druggie” song.  You secretly worry that someone saw you buying that Barry Manilow album last week, ready with the story that it was a birthday present for your aunt. 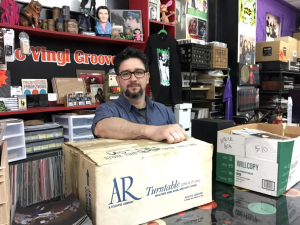 At the Vinyl Groove in Historic Bedford Downtown, you can still capture those magical moments.  In 2014, David Wolfe, self proclaimed music junkie, retired his wrenches, left behind the world of auto mechanics and followed his first passion -- music.  Building on his experience collecting records and attending over 400 concerts (his first being The Rolling Stones in 1988) David has created a musical mecca for serious record connoisseurs as well as the casual fan.  He caters to all genres serving customers from the Ohio area and as far away as China, Norway, and Japan.

Entering his shop is a step back in time, surrounding yourself not only with the sound of music (no pun intended) but also posters, black concert t-shirts and tour memorabilia. The Groove also carries a variety of vintage stereo equipment, causing you to squeal when you spot an oversized turntable just like the one that was in your basement.  Alongside are racks of the short-lived 8-track and cassette tapes. It is like a musical museum for the eyes and ears but one where you can sift through the artwork and walk away with the music that touched you soul way back when. 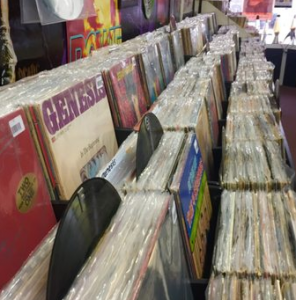 What separates The Vinyl Groove from the stacks of albums in your Uncle Joe’s damp basement is not only the quality of the inventory (face it Uncle Joe had an unhealthy obsession with The Captain & Tennille and you are hoping for Aunt Janie’s sake that it was Toni Tennille)  but also for the service and the process that their product is subject to.

Once received, all stock is put through an intense ritualistic cleaning process by one of the “private militia of highly-trained record monks”.  Records are bathed, scrubbed, vacuumed, and rinsed in a detailed process to loosen and remove debris and return the record to its original glory.

After being sheathed in a fresh sleeve, the attendant record monk lights incense and composes a haiku for the record. It is then brought to the front of the shop and listened to and scrutinized for pops, ticks, scratches and skips. If the record is found to be wanting, it is either discarded or banished to the dollar bin for bargain hunters.  Only those records that meet the strict standards are offered for sale at The Vinyl Groove. 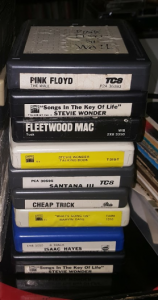 David and his brother Ben are always willing to help track down obscure records, discuss the local music scene (best places for live music according to David are the Grogg Shop and Beachland Ballroom) or assess the value of a collection.

Regardless of what your needs, take a sentimental journey with a visit to The Vinyl Groove in Historic Bedford Downtown.  As Edith Piaf sings, you will have no regrets.

Your ticket for the: Bedford is a Groovy Town – The Vinyl Groove Record Store